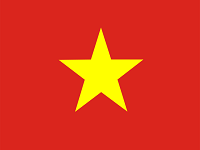 
Vietnam is the easternmost country on the Southeast Asian Indochinese Peninsula with an estimated 95.5 million inhabitants as of 2018. It is the 15th most populous country in the world, and shares land borders with China to the north, and Laos and Cambodia to the west. It shares its maritime borders with Thailand through the Gulf of Thailand, and the Philippines, Indonesia and Malaysia through the South China Sea. The capital city is Hanoi, while its most populous city and commercial hub is Ho Chi Minh City, also known by its former name of Saigon.